THE HISTORY OF GRAM’S PLACE

Gram’s Place was established in 1991 by founding owner Mark Holland as a result of his having traveled to Amsterdam. Impressed by the tolerant nature of the people there, Mark returned to his Tampa, FL home with a dream: Mark’s dream was to create an environment where people could gather in both the “Spirit of Music” and in the spirit of “Mitákuye Oyás’iŋ”— (All Are Related) — A Native American phrase that reflects a world view of inter connectedness that is held by the Lakota people of North America. Mark wanted to bring people together through music, considered by many to be the international language.

In 1980 Mark founded The Gram Parsons Foundation to share, perpetuate, and educate people about the music of Gram Parsons. Working 4 years with John Kravets and Judy Katz, Mark later wrote, produced, and directed the only known video documentary about Gram Parsons titled The Legend of the Grievous Angel for Tampa’s public access cable in 1989. It was also in November of that same year that Mark made his very first trip to Amsterdam.

Mark’s dream has since been built upon and sustained by a world of peoples, friends, relatives, and Guests since 1991. Mark’s dream began to really come to fruition in 1993 because of a “Joining of Spirits” between Mark Holland and Brenda McClintock and the dream has been growing ever since as a direct result of the personalities and the contributions of each and every guest who’s stayed with us since. Welcome. 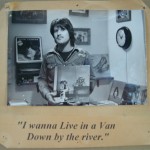 Mark Holland died at the age of 56 on November 4, 2007.What Mark created in his lifetime endures as something particularly special and endearing to so very many people throughout the world. Mark Holland, a lifelong resident of Tampa, lived life on his own terms. Mark will be remembered by both family and friends as an unpretentious, profoundly unique, and very special friend. Mark’s passion was music, and he was considered a music historian by many. He enjoyed many exceptional relationships with close friends as well as with his guests. Mark will be missed dearly by many!

Mark Holland was a proud recipient of the “Gram Parsons Award” created by Henk Korsten of the Netherlands for those recognizing that Gram Parsons is the official God Father of Country Rock Music.
Gram’s Place is named in honor of the contributions and memory of musician Gram Parsons (1946 – 1973)